Look at this great, minimalistic cover! It’s so perfect. Well, maybe the person should’ve been a threep (robot). 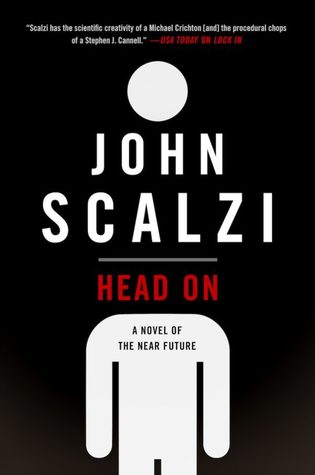 Hilketa is a frenetic and violent pastime where players attack each other with swords and hammers. The main goal of the game: obtain your opponent’s head and carry it through the goalposts. With flesh and bone bodies, a sport like this would be impossible. But all the players are “threeps,” robot-like bodies controlled by people with Haden’s Syndrome, so anything goes. No one gets hurt, but the brutality is real and the crowds love it.

Until a star athlete drops dead on the playing field.

Is it an accident or murder? FBI Agents and Haden-related crime investigators, Chris Shane and Leslie Vann, are called in to uncover the truth―and in doing so travel to the darker side of the fast-growing sport of Hilketa, where fortunes are made or lost, and where players and owners do whatever it takes to win, on and off the field.

Rating out of five:

I was drawn in by the interesting plot, especially as it’s techonological development to combat illness. What I got was an fbi agent Shane discovering bodies, getting into accidents, Shane and his partner Vann trying to connect it all together and find the motives. In the middle it seems very messy, and not in a good way.

Everything is happening around the two fbi agents, mostly not caused by their actions. They are two pieces in a game where I have barely been introduced to the world, let alone who or what could be behind the murders. I can’t bring myself to care when someone dies that early on, even if it’s to kickstart the need for Shane’s investigation in this story. For the Hilketa player I was almost half into the book before I felt bad for him, with some details on how much pain he must’ve been in.

I think this would work very well as a tv series, where you get to see the threeps and Hilketa game from the start. For the most part I think so because you can watch and judge the other people in the story, try to find the murderer yourself, where here you don’t really get details on characters. The book included things like how Shane’s treated differently because he’s a Haden, both at work and in private, what being an Haden means and some of how the sport Hilketa works. But it’s a lot of information that needs to go out just for the reader to understand what the fbi agents are doing. For example that statistics in Hilketa is displayed in this one public way, and changing that can be illegal because here is the information it gives on players, so it’s a lead. Trying to do that without information dumps (which I think was well done!), along with introducing characters connected to it, and that there’s more than one murder. It’s a lot and while I found it surprisingly easy to follow, it made the investigation, and such the story, slower and less focused on characters.

This is the standalone follow-up to a book called Lock In, which I haven’t read. I would’ve like to know more about how the locked in syndrome and Haden people started out, with the development of the threeps. I looked it up and it seems like the short book Unlocked contains all the backstory, so I would like to read that too. It’s free here, and while the writing or plot doesn’t give you insight in Head On, if you’re interested it seems to be a smart 60-pages read before the other books.

Thank you to Tor Books for receiving a copy of this book through NetGalley in exchange for an honest review.

One thought on “Head On by John Scalzi”